Hot Spots: The Museum of the American Indian

From the tip of the Mohican Trail to Fort Amsterdam. From Bowling Green to a toppled King George. From the Customs House to Bankruptcy Court.

Originally it was the culmination of the Mohican Trail. Surrounded by salt marshes and Lenape canoe landings, its shores were piled high with oyster shells left over by fishermen, evidence of millennia of human presence preceding European colonization. Then, it was the precise site of Fort Amsterdam. At the edge of the new Dutch colony, a spiked fence and earthen ramparts (which eventually came to be known as “Wall Street”) was erected with uncompensated labor, including enslaved Africans brought by the Dutch to construct the company town’s foundations. Thus, the perimeter defending Fort Amsterdam, later known as Wall Street, marked the beginnings of colonialist expropriation of Lenape lands and the first stage of land privatization in Manahatta.

“Bowling Green”, New York City’s oldest park, was named for the bit of green in front of Fort Amsterdam, where cattle grazed, troops paraded, and early statesmen bowled after meeting at city hall, a tavern a block away. Later, that green became a site of bloodshed, when the Dutch Governor enacted a state of war with the Lenape. Soon after, under the English, Fort Amsterdam became Fort George, and the bloody field in front of it continued as a recreation ground, a “Bowling Green”.

When the English demolished the fortress wall, they opened up Wall Street to become New York's prime marketplace, where raw materials produced by enslaved Africans in the Caribbean were traded on the street - alongside human beings themselves. This was soon followed by the 1711 erection of the auction block on the waterfront to the east of Bowling Green. The privatization of human life accelerated, such that New York at one point became the center of the slave trade - but the erection of the auction block also elicited New York’s first slave revolt.

Soon enough, Bowling Green became a site of revolt and revolution. Several decades later, in 1741, came the second revolt of enslaved Africans; 14 fires ignited, including several inside the fort walls. Within two decades of the revolt, a group of sailors took inspiration and set fires at Fort George, playing an early role in fomenting the American revolution. Not long after, the Declaration of Independence was read aloud in the streets of New York, with Bowling Green as one of the first stops. That day in 1776, they “deposed” King George by tearing down his statue at Bowling Green's center and lopping off the crowns topping the fence (the same rough-hewn one that fringes the park now). During the war, nearly everything surrounding Bowling Green burned down, but the area was soon rebuilt, becoming the finest part of town - George Washington moved there from his boxy white house on Cherry Street not long after becoming President.

When waves of Irish immigrants started arriving for the first time in the 1930s, they walked directly from the shore to Castle Garden nearby, and then across the green, followed by non-stop streams of immigrants for a hundred years. By the 1880s the neighborhood of Bowling Green had become particularly Mediterranean, and was called “Little Syria” due to the many Arab shops on Washington Street leading up to the market. The vendors at Bowling Green and the shops of Little Syria were the first sights and sounds hundreds of thousands of immigrants encountered when they arrived from Ellis Island. That is, until the introduction of the 1924 National Origins Act, which leveraged racial hygiene rhetoric to halt emigration from the “East”. Much of the self-identified “native” American population had come to associate the arrival of certain types of immigrants with the introduction of new epidemics. Given that the neighborhood of Bowling Green was built over Lenape fishing grounds and thus prone to flooding, and that its inhabitants lived in some of the city’s oldest and most dilapidated housing, Little Syria fared poorly during disease outbreaks. 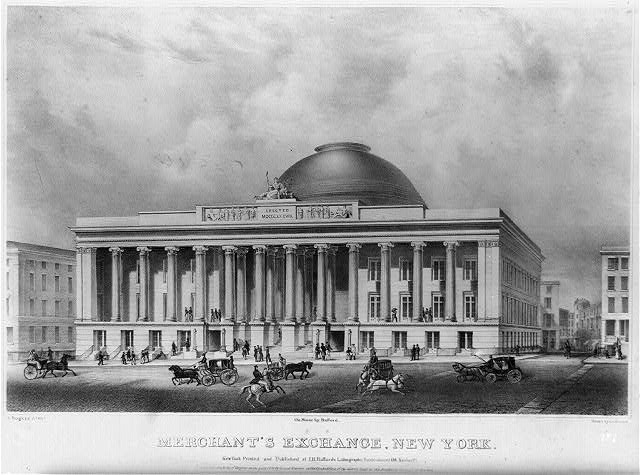 The situation was exacerbated by the absence of any social welfare system, as well as by a string of economic crises starting with the Panic of 1863. These panics stemmed from a lack of economic regulation by the Customs House then located on Wall Street, itself a den of corruption, staffed as it was by beneficiaries of the Tammany era spoils system.

When a new era of regulatory reforms launched at the turn of the century, the Customs House was restructured and a new building was commissioned for Bowling Green, a 1906 monument to progressivism and regulation of the robber barons. 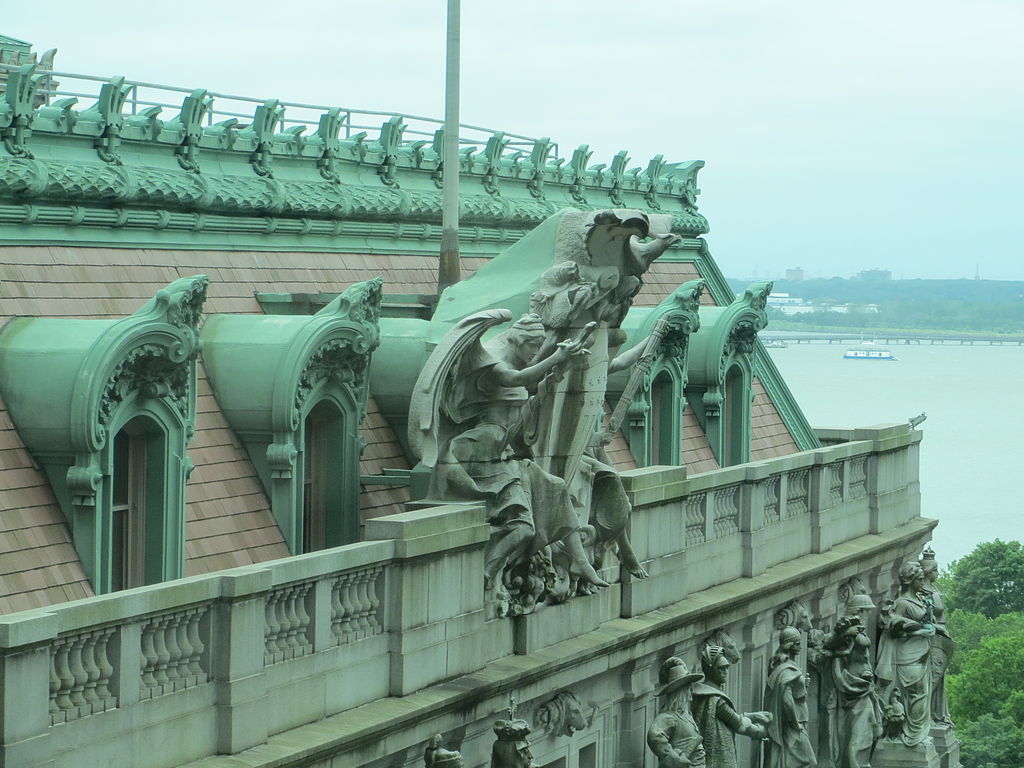 Designed as an homage to global trade, the Alexander Hamilton Customs House lays bare the need to move towards the decolonization of New York City and the United States as a whole. Anchoring the entrance to the Customs House sit four great trading powers, women symbolically representing the continents of Africa, Asia, Europe, and North America.

On one end, the sculptor, Daniel Chester French, presents Asia as a despotic empress in a deep meditative trance, flanked by docile servants. On the other end of the building, next to a crumbling sphinx, sits a disrobed Africa deep in slumber; she is the only naked woman on a pedestal, suggesting violation with a voyeuristic twinge of exoticism. In contrast, Europe is represented as a regal woman sitting back with her arm on the book of knowledge containing all her discoveries within, resting atop her globe; she is the explorer who “discovered” and mapped the world, and in so doing, conquered and "owned" it. 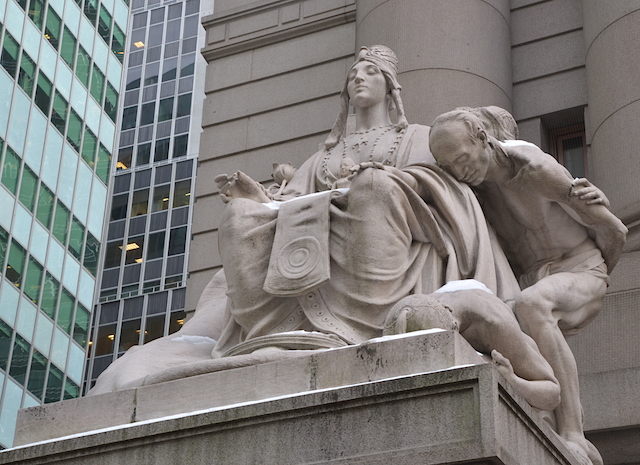 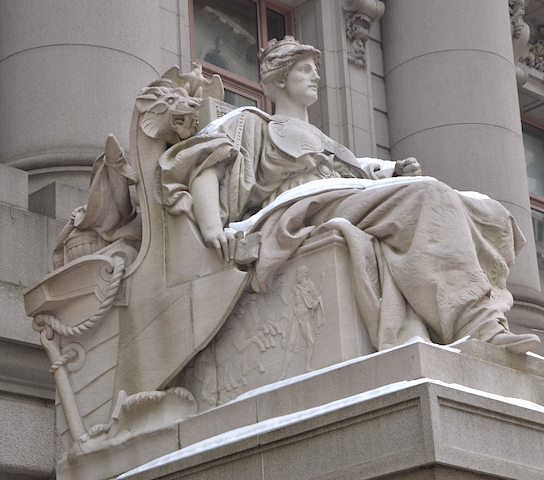 In contrast to the staid European monarch, the Americas are represented by a young woman in action. She is Lady Progress, and hearkens to the promotional iconography employed by railroad companies that forged tracks out West and laid the path for expropriation of Native American lands by Europeans. At her side a young man wearing a phrygian cap -- symbolizing liberation from slavery -- kneels with a hammer and a railroad tie. At her shoulder, a Native American man -- not in Lenape attire but wearing a Plains-Indian headdress -- stands astride. Looking from behind her, from the past, he guides her through the Americas, "Forward!" The Americas, represented by Lady Progress, is manifest destiny embodied. 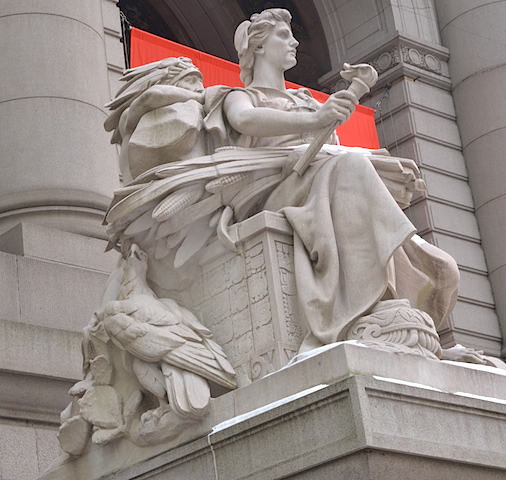 The Custom House building at Bowling Green, particularly Lady Progress, continues to communicate several aspects of American identity which rely upon the appropriation of Native American lands and imagery. Think: The Boston Tea Party. Patriots dressed in Native American guise to distinguish themselves from their fellow Englishmen. To the Crown they communicated: We are not like you. As you can see we are are natives to this land, and so you are colonizers. We are natives to this land, we are Americans, we are "native Americans". Later on, the same imagery would be used by the early precursor to the Democratic Party, the Tammany Club, which was named after a fictitious Lenape friend to the Americans, Tamanend.

And when have we not relied upon the appropriation of Native American lands and symbols to forge our identity? When we're instead identifying with the maritime explorers who claim to have discovered the Americas. At the center of the Custom House rotunda are larger-than-life portraits of colonial conquerors, governors, and traders: Columbus, Gomez, Verrazzano, Vespucius, Cortereal, Cabot, Hudson, Block. 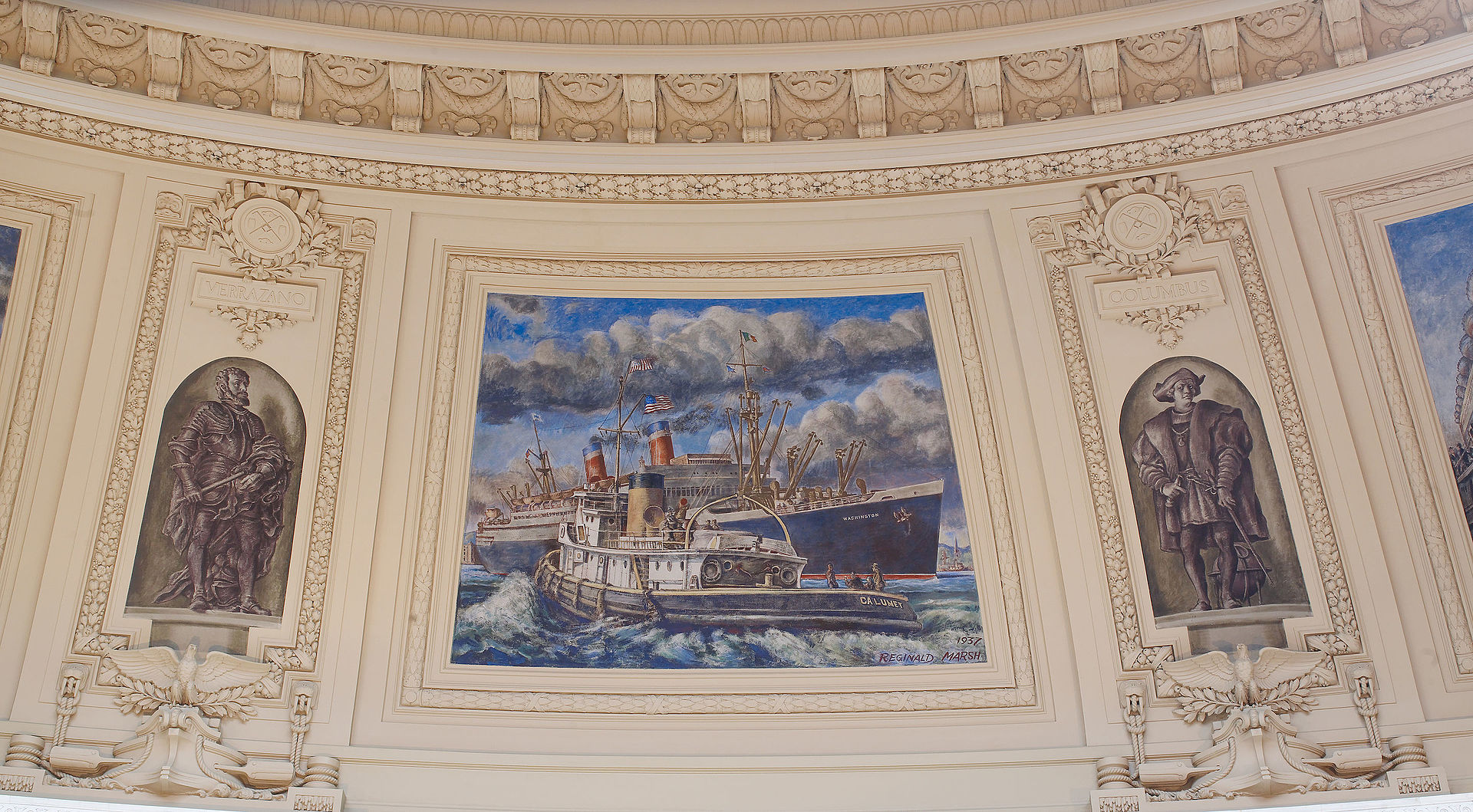 Above the Customs counters where clerks and bureaucrats levied taxes on goods coming in to New York harbor, one looks up and sees great blue murals of 20th century steamships brimming with cargo, luxury passengers looking out from the upper decks, and undoubtedly immigrants below in steerage. Just beyond that grand rotunda full of the same conquerors and governors who displaced and dispossessed the Lenape and all Native American nations, lies the entrance to the Museum of the American Indian. 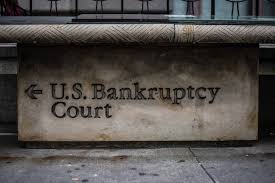 Strikingly, the U.S. Bankruptcy Court sits tucked away on the ground floor of the very same building. That Americans owe their very residence to the Native American population is not communicated anywhere in the commemorative signage placed around the Museum of the American Indian. The New York location originated as a Smithsonian overflow collection which places little emphasis on the significance of this precise location to the Lenape that named this island Manahatta. An extremely faded plaque positioned outside the margins of the museum and next to the entrance to the Bankruptcy Court acknowledges that the Lenape traded pelts with the Dutch nearby on Beaver Street, and suggests that the Dutch West India Company, and the English empire after, defrauded the Lenape of their lands. Little is said of the significance of locating the Museum of the American Indian at the tip of the Mohican Trail, on the precise site of Fort Amsterdam. Inside the building, the dissonance between the display of portraits of conquerors in the Customs House rotunda, and the collection of personal effects of those they conquered in the Museum of the American Indian, goes un-noted. Visitors are left to make these important connections themselves - and very few have enough context to do so.

"Intersectionality" is not just a fashionable catch-phrase. It's fundamentally historical.